A match of 100ft Robot Golf starts out like any other golf game. Your character is positioned over the ball, club in hand, aiming for the fairway. You start your swing with a traditional power gauge like you would in many golf games that have come before it. Except this time, your character is a ten story tall robot the ball isn’t all you’ll be swinging your clubs at…

100ft Robot Golf is obviously a golf game. It’s also part Rampage with a dash of Rock’em Sock’em Robots. In my demo, the match was played with no separation between player turns. After you take a shot, you’re immediately free to roam the course, searching for your ball to line up the next shot. You’re also free to swing your club at buildings, knocking them over to free up your shot or mess with the competition’s. You have the option to hit competing robots out of the way or stand in front of them, blocking their shots. Between the match that I played and the three or four others I watched, I immediately saw different play-styles emerging. In one match, both players opted to play it straight, taking shot after shot without messing with one another too much. In another match, the two players immediately got aggressive after their initial shots, swinging their clubs at one another and flying up to hit the other’s ball off course in mid-air.

From what I saw, 100ft Robot Golf is multiplayer chaos at its finest. Everyone who demoed the game with me was having a blast, chatting and laughing with one another. I was also told there will be other modes available, including more traditional turn-based golf as well as customizable rule sets. With local and online multiplayer for 2-4 players, it’s going to be an easy sell for people who are looking for new games to play with friends. But what if you aren’t interested in the multiplayer? 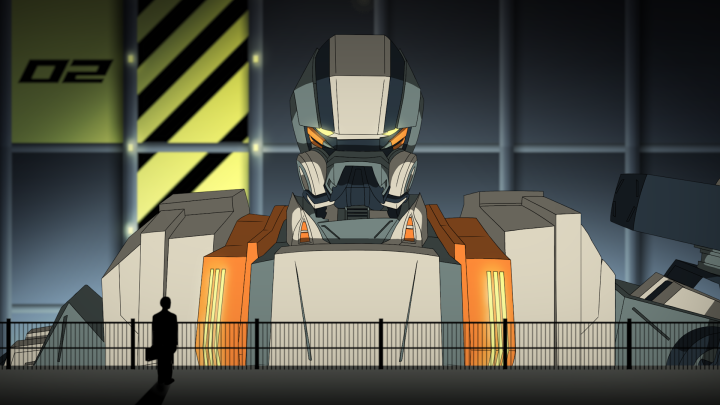 No Goblin has also promised a single player campaign for 100ft Robot Golf. Although details so far have been limited, we know that the game’s story will revolve around the life of Robot Golf pilots trying to work their way up the ladder on the Pro Robot Golf circuit. The developers hope to get players invested in that world through 90’s inspired mech animations, something seemingly along the lines of Transformers cartoons. One of the most interesting bullet points about the game is that, although demoed only on PS4 at PAX East, it will also launch on PlayStation VR. Right now we don’t know much about that part of the project however, other than it’s target release date of 2016.

Although I’m interested in seeing what the 100ft Robot Golf‘s single player campaign will look like, I suspect that multiplayer will be its main selling point. The game’s brand of over the top Kaiju combat mixed with its own version of arcade style golf should cast a wide net, keeping the intimidation factor low for more casual gamers to pick up the controller and play together. It’s a game I can’t wait to break out with friends, have a few drinks, and share some laughs over and I look forward to hearing more about it in the coming months.