Bowser may have a right hand man in his son Bowser Jr, but when you’re trying to keep Mario and friends busy through eight worlds, you need a little more help. That’s where the Koopalings come into play. These seven baddies in training made their first appearance in Super Mario Bros. 3 back in 1988. Since then, they’ve appeared in a number of Nintendo’s properties including the New Super Mario Bros. series, Mario Kart 8, and even the newest entries in the Smash Bros. series.

So, now that you’re given the option to choose them as playable characters, which Koopaling should you go with? Here are my thoughts, listed from worst to best…

Larry’s presence at the bottom of the list is really just due to his boring appearance. He’s basically the most generic of the Koopalings with spiked hair and his magic wand. It’s tough to bring him up any higher as a result.

Iggy gets the slight edge over Larry because of his sweet namesake, but he’s essentially the same character with glasses and green hair. I mean come on, there’s only seven of them…we don’t need borderline clones. (Yes, I know they’re all borderline clones…)

Overall, Lemmy is far from the most impressive Koopaling. I mean look at him, he’s obviously unfocused and just here to mess around. Plus, how is he going to accomplish anything walking around on a yellow exercise ball? Not the kind of commitment you’re looking for in a competitive game of Smash. 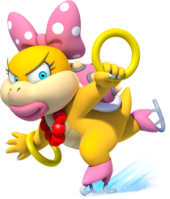 This is where things start to get more difficult since the next four Koopalings are all pretty excellent. Wendy, the only female Koopaling, starts off the sequence of awesome Koopalings for a few reasons. First, she wears ice skates. Second, she has huge 80s inspired bracelets. Overall though, she just has a sort of badass, roller-derby look to her. Or ice-derby? Is that a thing? 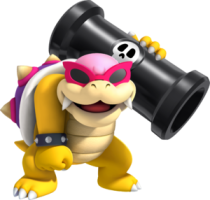 Leading off the top three is Roy. Frankly, I’m not sure there’s much to say that this picture of him doesn’t cover. He’s pink, wears pink sunglasses, and pulls it off all while looking like a badass.

Much like Roy, Morton just sort of oozes badassery. His darker skin tone is unique among the bunch and he has a star tatoo around his left eye. A star tattoo. Come on. Oh, and look at those studded bracelets.

Topping off my list is Ludwig von Koopa and it’s all about the hair. Okay, it’s partially about the green face and the single fang square in the middle of his mouth…but it’s mostly about the hair. Those blue locks are fantastic. Nothing beats watching them bounce in the wind during a heated Mario Kart 8 race. Not convinced?

…yeah, I thought so.

So there you have it, my definitive rankings of the Koopalings. How would you rank Bowser’s minions? Let me know in the comments!